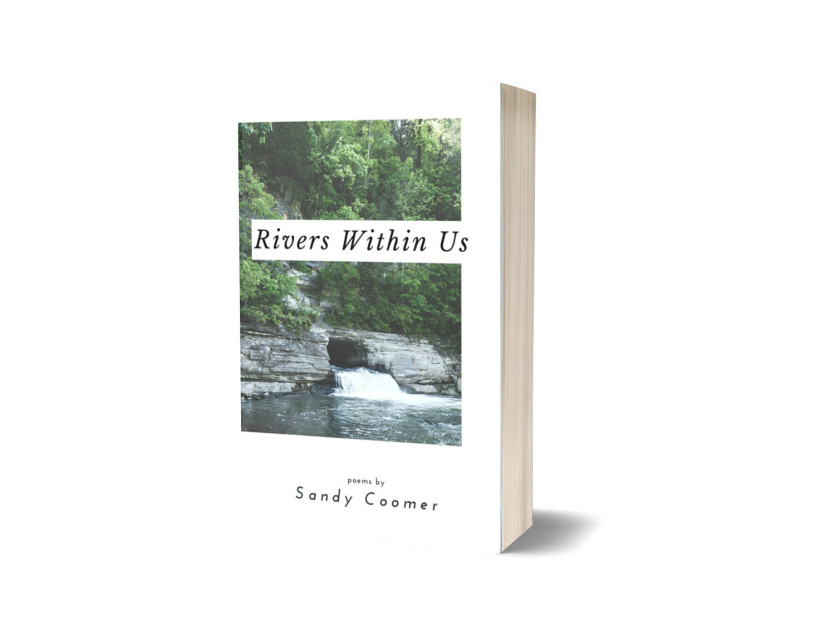 Rivers Within Us by Sandy Coomer

Sandy Coomer’s, Rivers Within Us, is a collection of poems that allows readers to reevaluate and question the way in which they move through life on a daily basis. What does it mean to live and die? What should we expect in life? How can dreams come true and, still, we are faced with disappointment? This movement is portrayed in settings that are saturated with images of nature and, in particular, the river; symbolic of the life force that carries us all. Coomer further creates movement and illustrates mastery over her craft through purposeful stanza breaks and rhythmic lines that plunges readers into each poem. Experiences and notions, such as love and synesthesia, become tangible through concrete images derived from nature and abstraction; ants are no longer just ants but are a device to belittle and inspire awe, praise and religion are brought together to create something almost physical, and dreams showcase vulnerabilities we would rather hide but cannot. Notions about life are torn apart and rearranged again through similes and metaphors that become more real than the very thing itself. All of these elements culminate into a collection that tries to make sense of life, death, and love through the swift and crushing movement of our passions that move like a river. Coomer speaks to all of this in just three words, Rivers Within Us.

"Sandy Coomer's poems take us into earthy recesses of life's moments, with images that paint both the quiet starkness and the noisy heart of reality. Rivers Within Us is a most-satisfying and thought-provoking collection of poems."

Kathy Ganske
“I’m relying on language to get by,” Sandy Coomer writes, and if you read only this one line in her poem “Anthem,” you might be fooled by that modest assertion. In truth, Coomer’s doing much more than getting by with language; indeed, Rivers Within Us reveals her ever-solid craftsmanship at a new level of lyricism and intention. Echoing some of the themes in her previous two collections, these poems offer hymns of praise to nature and the landscape of rivers in particular: to willow fronds, minnows, bull frogs, and most of all the “boundless rushing current.” But that current carries much more than pastoral abundance—it also carries death and dreams and wild desire, since, as Coomer writes, a “place is not complete without its people.” Internalizing the landscape and directly examining language, Coomer does her finest work, weaving, for example, the peace of an old graveyard in one poem with “high dead words spilling” in another. Coomer’s world, even when it’s tragic, is a place due reverence. It’s a place where a potato chip Jesus can offer wisdom, where words taste like cinnamon, and where a loon can speak. It’s a place where words matter; where stillness matters; where, with poet as guide, we overcome fear and despair to expect another miracle, to believe her when she says of our human striving, “Yes it matters, yes.”
​
​--Kory Wells - author of Heaven was the Moon

"In her book, Rivers Within Us, Sandy Coomer leads her readers down to the riverbank and immerses them in the beauty and mystery of a world that is at once wildly powerful and overwhelmingly calm. She walks with them through the ever-twisting journeys of a river and a human life. Coomer’s collection is a joy both to read aloud and to consider quietly on the page in solitude.

Coomer grounds her collection of poems in the gritty details of everyday life, such as Vietti Chili labels and Keds sneakers, but also reveals a dream world in which tornadoes threaten destruction and a loon calls a question to the dreamer. Coomer describes the real and imagined worlds in stunning detail.

She explores the rivers and roads of the American landscape in poems like “Wabash, “Driving West Across Montana, “Unnamed Road,” “Fair Park,” always enriching her description of these places with the meaning of an individual’s journey through them.
Throughout her work, Coomer acknowledges the inevitability of decay and the possibility of renewal. In “Bones,” she honestly considers mortality and one’s legacy to the future generations and place in family history. She exposes the realities of disease in “Anthem” and looks at death through the eyes of a child in “The Black Ant.” Her tight focus and controlled pace keep the reader attentive to the images and themes in each of her poems.

A strong undercurrent concerned with the powers and limits of language flows through Rivers Within Us. The poems, “Anthem,” “Synesthesia,” “Kyrie Eleison,” and “Most of All,” in particular, delve into the sound, meaning, and importance of words and language in understanding the world and other people in relationships. Coomer does not shy away from discussing the difficulties of speaking and misunderstanding of words.

Coomer investigates the river of life as it tumbles through childhood delight and fear in a family, the search for a relevant faith and sacred places, curiosity and reverence for the natural world, competing desires for safety and danger, the need for freedom and restraint, and love’s connections and separations throughout a life. Her ambitious project reaches a satisfying conclusion in her final poem, “Rivers Within Us,” in which she revisits several of her themes, expressing hope in the face of uncertainty and reminding her readers of the beauty and joy of living, even in the darkest moments.

---Christine Fraser - poet
"Sandy Coomer’s poems in Rivers Within Us plumb the depths of humanity through the lens of the cleansing, and sometimes unforgiving river currents.  We sink into the soiled banks, examine the roots of an ancient tree and admire the artfully woven grass. We are washed clean by the rushing rapids and terrified as the river jumps its banks threatening our existence. Through metaphor and liquid language, Coomer helps us examine the unpredictable nature of life and consider the weeds that might choke us in despair. She touches on the life-affirming gift of tiny seeds that bring us blackberries and trees, and we are reminded of the seed that brought us into being and ultimately provided the roots for our own circuitous journey through life.

Rivers Within Us is a powerful reminder that man is part of the eternal energy and flow of life; the collage of our days are pieced together by the natural and by our search for ultimate truths. This is the work of a talented poet who has seen the river and channeled its stories in a collection you will long remember."

---Rita Bourland, author of the Children’s book A Halloween Brew of Poems Just for You