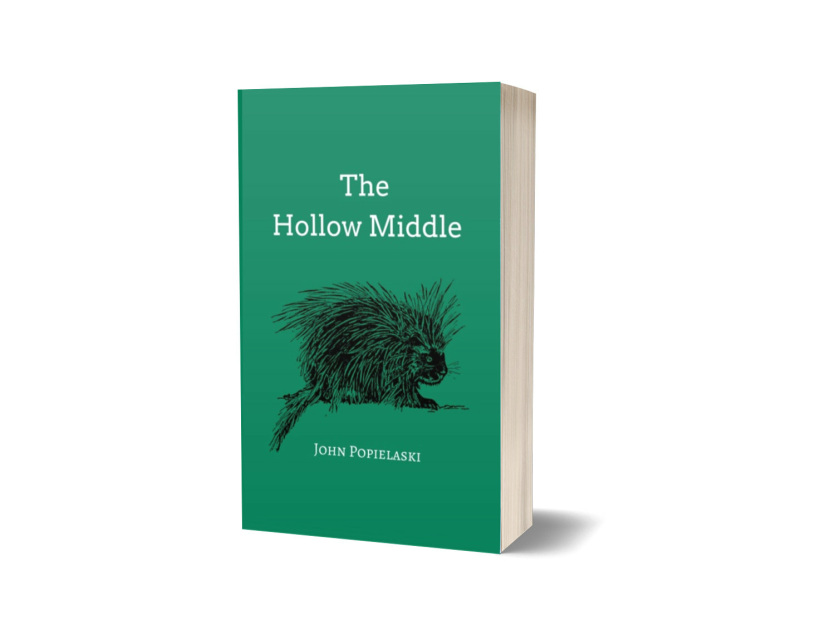 The Hollow Middle by John Popielaski

The Hollow Middle follows Albert Lesiak, an aging English teacher in Connecticut, who receives a windfall in delayed acknowledgment of the government’s complicity in his father’s cancer death and decides that it is time to live a different life on land he owns in Maine.

When his wife Mary suggests that they could foster or adopt autistic twin boys she fell in love with on a website and could use the stipend money in furtherance of Albert’s vision, Albert gradually perceives himself as possibly adapting to the role of patriarch.

A meditation on the curiosity of making sense and the dilemma of becoming true, The Hollow Middle ambles, mostly, and goes still for periods of various duration, acting like it’s not beholden after all to the rhetorical.

"This is not a book with major tension swings: there are no major shocks, no extreme emotional highs or lows or life changing epiphanies. Lower-hum tensions keep the narrative moving: marital below-the-the surface rumblings, uncertainties as to whether Albert can stop showing up for work, stop paying his mortgage, and eventually lead a newly forged family into the Maine woods where there is concern over a new highway boring through. But these stressors are beveled rather than sharp. This is welcome: instead of feeling manipulated, the reader slips into the writing’s rhythmic swings, up and down curves never arcing too high or low, yet always moving toward small, and sometimes bigger, resolutions and epiphanies."
​-- JAMES SHELLEY, Dactyl Review

It’s rare that our attention is captured in just a few lines, but drop yourself anywhere into the first chapter of The Hollow Middle, and you’ll find yourself caught up. Popielaski’s style is an organized four-car pileup, with just a bit of an echo of Joyce, a bit of an echo of Eliot.
--The Seattle Review of Books

The author has truly captured the thinking patterns of a brain injured very intelligent human being. The writing is dense and full of the amazing random and environmental thinking of this kind of mind. I loved the politics that emerged in the thought patterns of this character and I was drawn into the huge number of ideas which traveled often randomly through his mind that the reader is treated to on the page.
-- Patricia R. Hamilton

The Hollow Middle searches for meaning outside of materialism, hedonism, and pretty much anything else espoused by media and society.
-- Kyle St. George