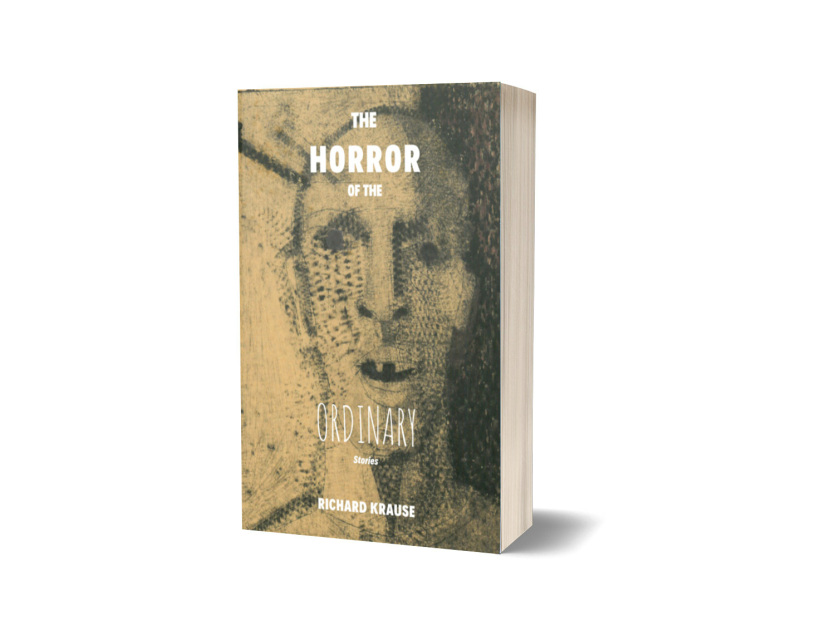 The Horror of the Ordinary by Richard Krause

The stories in this collection deal with a property owner’s infestation of Japanese beetles in his backyard, panic over an imminent marriage driving a man across state lines, the unfortunate tragedy of a too tall Afghan named Hamid, the consequences to a laborer getting a splinter in his finger when disposing of Christ’s cross, an orthodontist’s big game hunting coming home to roost, a study of goodness in a nun departing Appalachia whose ancestors prosecuted Indian Wars in Iowa, the unexpected tragedy of a Japanese pitcher’s performance in American baseball, the legacy of an alumnus of the year’s service in the CIA creating orphans for a Pennsylvania orphanage, a shocking personal discovery investigating a decades-long crime spree in Ohio and Pennsylvania, a bizarre use for spoons in a college cafeteria, a man’s overpowering attraction to women with glasses, the striking consequences of bullying in Japan, the fate of a muskrat coat for a Red Cross worker, speculations on suspenders that barely hold a high school reunion together, a zoo story during a civil war in Africa, family taunting on a vacation swim that goes horribly wrong, police brutality towards an apparent sex offender, disturbing thoughts about an alligator watchband, the horrid ending to a family history of food, a visit to a restaurant in Richland, Kentucky that uncovers revelations about the Middle East, a scarlet letter for a girls’ basketball coach that ruins the season, the story of betrayal of a ninety-year-old woman, and the charting of a Japanese puppet master’s decline.

​Availability: All retailers including Amazon

At first you might be amused, or bemused – and after a while you’d begin to feel uncomfortable, and finally, if not horror, then certainly unsettled, disturbed, uncertain. And if their words almost made sense – were just out of reach, or invoked other characters or times or people or events with which you might have some familiarity, without being clear and precise about it – so much the more distressing as you try to grasp onto something familiar but it slithers away and won’t be firmly gripped and held before the words move on to another idea or turn around on themselves.

First sentences tantalize.  “It was like he was visiting them,” one story begins.  What is “it”? Who is “he” and “them”? The narrator is often tangential to the main character, a distant yet invested observer.  As the stories progress and pronouns become persons, the point is not for the plot to become clear; rather, the point is the act of uncovering layers that obscure and complexify the truth.  The texture is rich and thoughtful.
​
Much contemporary literature taunts readers to deduce the target its symbols point to.  Instead, Krause is candid with symbols, fileting them open and exploring their depths. Beetles, cockroaches and splinters explode into infestations.  Political and personal atrocities plague the text, from the treatment of animals to concentration camps to orphanages to food hoarding during the Great Depression to the current obesity crisis.  Sexual fantasies turn perverse. Pedophiles lurk in plain sight. Victims inflict revenge when perpetrators least expect it. Be ready to confront a disturbing dark side in these stories. The bright side is the book’s careful, artistic attention to visceral and psychological detail developed into stories as intricate as a Japanese puppet show.
-- Mari Carlson (https://marisbookreviews.wordpress.com/2019/06/25/the-horror-of-the-ordinary-by-richard-krause/)