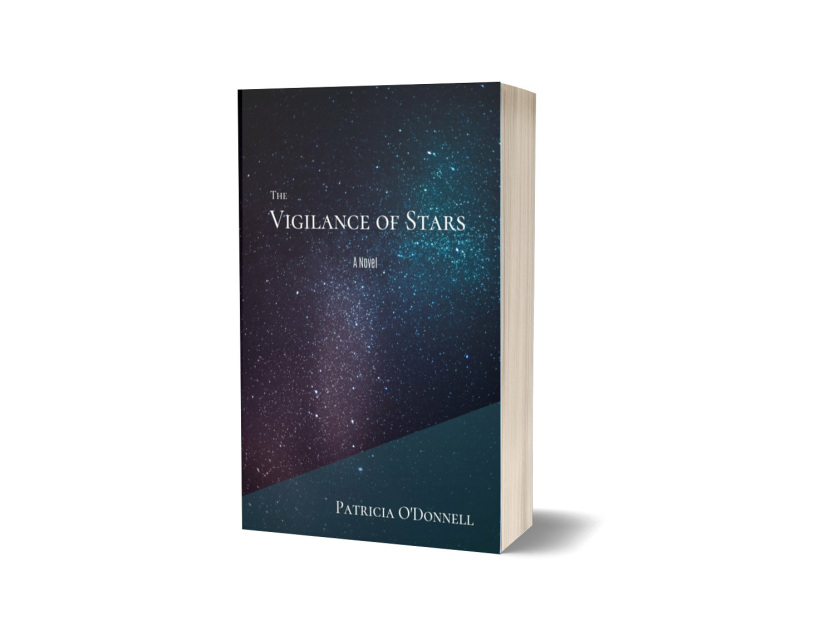 The Vigilance of Stars by Patricia O’Donnell

Four stories twine together in this novel set in both contemporary and 1950’s Maine. Kiya, a Portland hair stylist in her early 20's, becomes unexpectedly pregnant and determined to keep the baby as she struggles to recover from her brother's suicide. Peter, the baby’s father, wants to break away from Kiya and find love—somewhere else. Maddie, Peter’s mother, fights her own loneliness as she cares for Alex, incapacitated in a nursing home. Evie, Maddie’s mother, appears as a young woman in the 1950’s, searching to heal herself both emotionally and physically.

Kiya loses her confidence to be a mother in a shattering experience, which drives her from her home in Portland into the care of Maddie. On the shores of a wide and quiet lake in central Maine, Kiya tries to piece herself together. Peter, still in Portland, struggles to do the right thing without assuming the responsibilities of fatherhood, finding help from his new girlfriend Toni, who—for reasons of her own—pushes him into helping Kiya. In counterpoint to the lives of her descendants, Evie, Peter’s grandmother and Maddie’s mother, puts herself into the care of Wilhelm Reich at his institute in northern Maine, Orgonon. She is hoping to heal both her melanoma and (though she can hardly admit this to herself) her sexual problems.

The characters’ lives spiral together, moving with inexorable force toward an ending which takes place on an uninhabited island in Maine where the stars stand watch over lives both old and new.

Availability: All major retailer, including Amazon

THE VIGILANCE OF STARS is so compelling and readable, and O’Donnell is such a clear, deft writer, I turned pages, utterly engaged, until the shivery-beautiful ending moved me to tears I didn’t see coming. This novel’s pleasures are of the rarest and truest kind: a group of characters I grew to love, engaged in the most profound and quotidian, complex and simple human experiences—unflinchingly honest, absolutely gorgeous. Oh wow. I loved this book.

--Kate Christensen, author of THE GREAT MAN and THE LAST CRUISE

The Vigilance of Stars is a book of abundant life following the footsteps of tragedies and broken hearts and failed healing. Is the world powered by Wilhelm Reich's orgone energy, the collective sexual impulse? Or is it powered by something more sublime? When you take a pregnancy test, does that private moment lead you to the universe or deeply inward--or are those places the same?  Pat O'Donnell quizzes the everyday, seeks answers past and present. Her multi-generational characters are rich and alive and I care about them so much I've been waking in the night to consider what they've taught me. There's good in this world, and Pat O'Donnell knows how to make us believe in it, once and for all."
--Bill Roorbach, author of Life Among Giants, The Remedy for Love, and The Girl of the Lake.