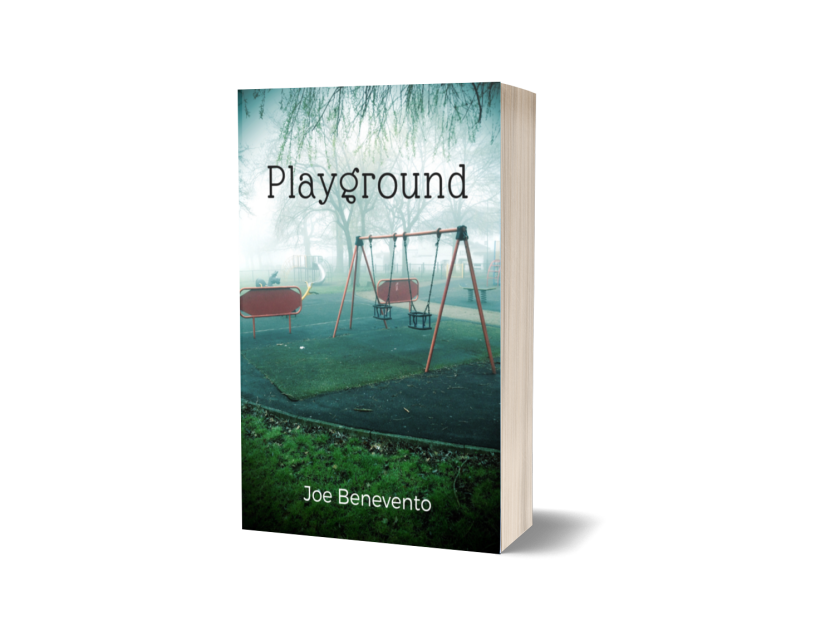 “Playground” picks up momentum from Benevento’s previous two books of poetry, his volume of “selected” poems, (Expecting Songbirds 1983-2015), and his chapbook of poems in his own invented form, After, by including poems with an even wider range of publication dates than in Expecting Songbirds, and the presence of eight new “After” poems among its twenty-six lyrics.

Themes such as the after effects of unrequited love, growing up in working class Queens, the redeeming potential in family, all make their appearance. This collection offers far more than recapitulation, though, with poems set in places as varied as a bagel shop in Columbus, a tapas bar in downtown Miami and a barrio in East Oakland, and subjects ranging from rehabbing a shoulder impingement, to participating in a track program for underprivileged youth to inventing a new kind of cake.

Throughout these poems, Benevento affirms, as he has in published work for over thirty-five years now, his obsession with the paradox of poetry’s ability to offer hope to a world that seems often hopeless without it.

This new collection of poems by Joe Benevento, artfully crafted in his trademark poetic diction both accessible yet unequivocally literary, are paeans to his blue-collar heritage (his father retired at the age of seventy-three as a maintenance man) and to the deep and abiding love he has for his wife and children.  "Bonifacio Payaso," exemplary of Benevento's poignant family poems, is triggered by his seven-year old daughter's creation of a colored drawing of a clown. Concerned about what might lie ahead for his daughter, the poet imagines her as "a dancer balleting inevitably towards / her later days with some other / largely unworthy clown."  The hard-earned wisdom inherent in these carefully chosen words is characteristic of the heartfelt and extraordinary insight which infuses each and every poem of this distinguished collection.
-- Larry D. Thomas,  2008 Texas Poet Laureate

Too many young people grow up with an adversarial relationship with poetry. A poem’s something to be confronted and reduced to its “real meaning” – which hides, of course, beneath obscure language. No wonder generations of students lose interest in poetry.

Joe Benevento’s latest book, Playground, could change their minds. It’s a vivid, grounded collection of poems that involve real places (the home where he grew up in Queens, an upscale restaurant in Miami) and real characters (family members, adolescent friends, first loves). Joe’s self-deprecating humor makes you grin, but the poems also sing with wonder, loss, and an ever-aching nostalgia for a past he knows very well he’s stained with rose-colored glasses.

Benevento shines when writing about his unrequited loves and, especially, his children.  He brings his young son and daughters to life without a trace of sentiment. And his choice of titles is inspired. How can you not  want to read a poem titled, “After Singing All Night for Twenty Bucks and a Bagel”?

Experienced readers of poetry will admire Joe’s use of metaphor and imagery, but his technique is woven effortlessly into plainspoken language that occasionally lifts into lyricism that will delight anyone, such as the ending of “Zoraida Martinez” in which a young Joey happily gives up his Catholic dream of holiness for the astonishing attentions of a pretty neighbor.  He was, he tells us, “like a budding / cherry blossom admitt[ing] the sun, knowing all my poetry would come / from then on as a way to be always recalling that miracle.”

Here’s an eminently readable book of poems that takes as its subject matter the joys and sorrows of everyday life.  That is more than enough.

In Joe Benevento’s PLAYGROUND, poems can be found everywhere. Significance appears in a child’s drawing, via a successful recipe, and, always, through the memories that are too firmly imprinted to be forgotten. Benevento’s language is invitingly familiar, and that’s where his craft lies. He makes it look easy but don’t be fooled. These poems are hard wrought insights revealed in carefully crafted lines.