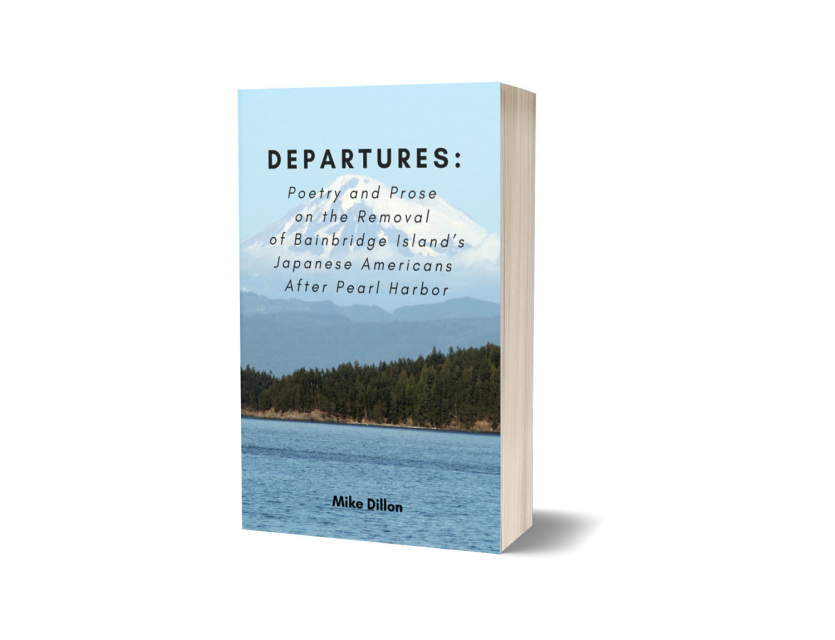 Departures: Poetry and Prose on the Removal of Bainbridge Island’s Japanese Americans After Pearl Harbor by Mike Dillon

The narrative of poetry and prose begins on the eve of Pearl Harbor. An old Croatian fisherman rows across Eagle Harbor on Bainbridge Island to light the kerosene lamps to guide the ferries in, as he does each night. Christmas lights decorate the cottages scattered around the harbor. The lights of Seattle glow to the east. A star falls “from the wayside of infinity.”

The next morning, a Sunday, brings the bombing of Pearl Harbor.

The owners of the Bainbridge Island Review, Walt and Milly Woodward, work into the wee hours to publish a special edition. Walt Woodward reminds his neighbors, “I am positive every Japanese family on the Island has an intense loyalty for the United States of America and stands ready to defend it.” Up and down the West Coast, however, hatred is stirring.

On March 30, 1942, 227 Japanese Americans from Bainbridge Island, under bayonet guard, are marched aboard the ferry Kehloken bound for Seattle and a train waiting to take them to Manzanar, a barbed-wire camp in the central California desert. Many of their island neighbors turned out to see them off. Not a few of them weep.

The author, using historical sources and family recollections, has crafted a poetic narrative of one of the most conspicuous injustices in American history, and explores how the healing goes on.

I have just read and reread Mike Dillon's Departures, Poetry and Prose On The Removal Of Bainbridge Island's Japanese Americans After Pearl Harbor.

The book is a chronology of the removal for interment, or imprisonment as the book corrects, of 227 American Citizen's of Japanese ancestry who lived on Bainbridge Island at the beginning of the WWII. The discussion is at once historical, social and personal, and the format shifts between poetry and prose. Dillon was born after WWII and has no firsthand recollections of the removals, but it was a topic of his family and community; he grew up with the wrenching experience near at hand as cultural memory.

Such a topic suits Dillon's writing. He is the master of taking an event, even a small personal event, and unfolding it to present a broad emotional vista. His tone is face-to-face conversation--his eyes are looking into yours in these poems. He recounts the details of the removals as personal acts. There are no polemics; his is not an appropriation of someone else's pain. It is shown to us as all our pain focused on the few. But equally all our own is the stark fact that many of us have recently lost touch with that reality.

A poem of honest modesty from the book:

Were We There?
Mike Dillon
Taunts and jeers and hands locked
into fists coiled around the bent Christ.
We would not have mocked.

A curt knock on the door.
A distant, starlit braying of hounds.
We'd have rowed the slave to the other shore.

We know how the west was won.
We'e not the kind to hood the inner eye.
Each day our human duty rises with the sun.

Anne Frank shelter with us?
Stout hearts must resist the sirens in the night.
History's arc is our sacred trust.

1941: The world rolled upside down.
Japanese Americans were our precious neighbors.
We know what we would have done.

But we weren't there--by luck or grace
A moment of silence, then,
For decisions we never had to face.

The individual works form a chronology of building pain, a chronology we the readres know is coming--as in watching Hamlet, we know how this ends. Still the pain is sharp and the outcome personal. Accustomed to closure in literature and films, I wondered how it ended and then I remembered that there are no endings for a community. We come back to Faulkner.

Thank you Mike for this small window into the past that is not past.