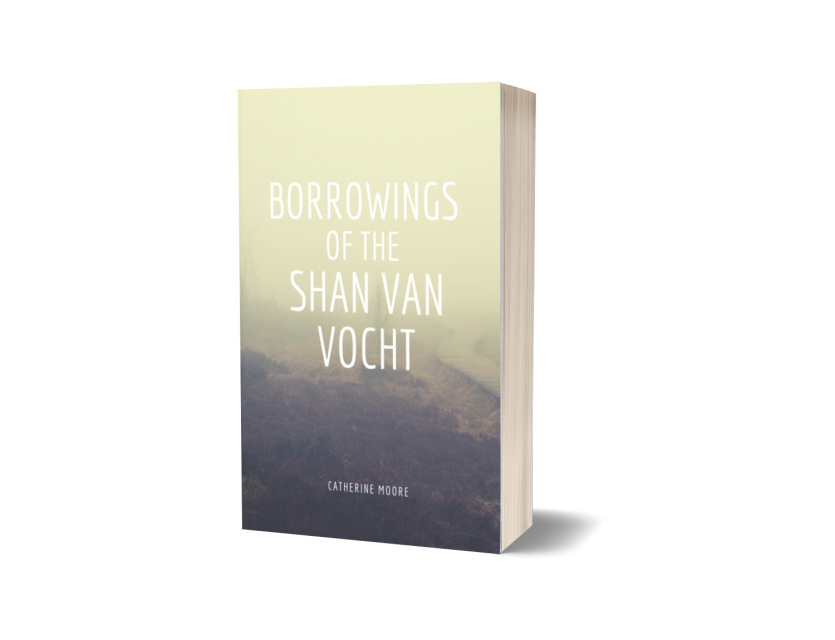 Borrowings of the Shan Van Vocht by Catherine Moore

Borrowings of the Shan Van Vocht by Catherine Moore is a chapbook-length collection of prose poems that explores lost voices of the soil-mummified nameless, whose bodies are recovered from bog lands. The ‘borrowings’ in Borrowings of the Shan Van Vocht are Bog Bodies—naturally preserved corpses— displayed sometimes like sideshow curiosities in museums worldwide. These bodies are titled after the bog, melting and churning, which exhumed them.

In creating a lyrical voice for these nameless, the poet kept in mind what modern-day forensics reveals about the nature of life and death for bodies recovered from the bogs—the what of their diets, the ways their occupations or illnesses marked their bodies, and the how behind their death.

The forces of nature at work on the bog lands are also given voice in this collection—wind, sun, and the Shan Van Vocht, the bog, itself. “Shan Van Vocht” is a phonetic transliteration of the Gaelic phrase (tSeanbhean bhocht) for the land goddess, its meaning translates as Poor Old Woman. In modern druid terms, it’s similar to Mother Nature. Using Gaelic in the collection’s title was instinctive since peat bog covers 17% of Ireland's surface. Other large bog lands are found in Canada and throughout Scandinavian countries. It is interesting to note that we know little of the Bog Bodies from Canada, as those corpses are honored with protection and, therefore, absent for this collection.

Poems within this collection were nominated for The Pushcart and The Best of the Net literary awards.

Catherine Moore's prose poems restore voices to figures long silenced by the bog. "The Drumkeeragh Woman" curses her husband’s betrayal. "The Haraldskær Woman" dreams of a final taste of berries. The “perfectly ordinary” "Auning Woman" remembers aspirations of girlhood, before pit and pinned body. Some may enter by choice—“I followed the wraith winds through the labyrinth's coils,” testifies the "Meenybraddan Woman," “All things smeared over with night green.” But most do not, and the poet has found a potent vehicle to explore entrapment and sacrifice. Consuming, preserving, the land always has the final word: “I soak the glorious cloud-water, stomach the earth flesh, ferment it to tannin, press it to peat. This is my vigil to swallow and salve.” This is a moving, disturbing collection.
—Sandra Beasley, author of Count the Waves

It’s commonly said that we are doomed to repeat history. But what if that history is buried in muck and mire? In Catherine Moore’s brilliant Borrowings of the Shan Van Vocht, “cadavers [are] the braille of death” and time “may dissolve a coin, yet clasp an ancient book of psalms.” Reimagining historical bog bodies is a feat of extraordinary imagination, and Moore’s narrators here—be they ghosts or corpses, even they can’t decide—are “breathless, ceaseless, eyeless, […] shadowless, useless,” yes, but they also know that “There will be an accounting.” Moore’s chapbook is a lovely, lyrical must, and the voices therein are precise and true, beautiful and tender—these are worlds inside worlds, endangered and kissed with confessions otherwise entombed forever.
—Gary McDowell, author of Mysteries in a World That Thinks There Are None

Catherine Moore’s collection Borrowings of the Shan Van Vocht breathes beautiful life into the grotesque remnants of these “bog women.” By reimagining the women as they once were, Moore resurrects their power, or in many cases, gives them power to take for the first time. Their decayed bodies and resurfaced faces become emblems of both rebirth and a “second burial.” Perhaps most notable is the intertwined theme of women violated and rejected by a society full of violent, demanding men, as well as of “the good men, fools and minstrels, [who] stood by.” She writes of a society built with “sons that grew to love” and “daughters that grew to fear,” which (when compared to today’s times) might caution of history repeating itself. Her collection strives to assure the bog women that through us, the reader, their “essence is not lost in the moor’s pickled sapling.” Do not think that Moore’s poems incite pity. The raw, visual, and wild imagined voices fight loudly against the bog, against the men, against their disappeared stories. Moore writes that “some are not right for the place they are born,” which may reveal the book’s true purpose—to transport these lost women into a new world. A world more fitting, more deserving, more connected to their stories. At least, we can only hope.
—Bryanna Licciardi, author of Skin Splitting