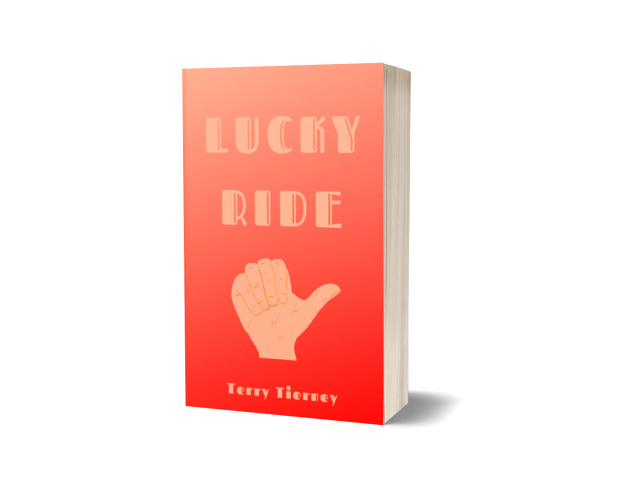 Set in the Vietnam era, Lucky Ride (A 2022 Maxy Award Finalist) tells the story of a recent veteran, an unraveling marriage, and a hitchhiking trip steeped in hippie optimism, post-war skepticism, and drug-induced fantasy.

When his friend Rick shows up in Binghamton, New York, with an interstate weed delivery, Flash jumps at the chance to escape his wife Ronnie’s affair with her middle-aged boss. Joining Rick on a speed-fueled drive to Fort Worth, Flash dodges a highway stalker and recalls his military service on Adak, a desolate cold war outpost where Seabees bravely defended their country with marijuana and LSD. Hitchhiking west from Fort Worth, Flash confronts Texas Rangers, amorous witches, armed felons, and good Samaritans, all offering advice and misdirection. But his dreams of starting fresh in California recede like a spent wave, his money gone and no chance of a job. Ronnie offers reconciliation and Flash must decide how much he still trusts the seductive pull of the irresistible campus radical he married before the draft descended on their lives.

You won’t be able to resist riding along with Flash in his journey, wondering, as he does, where his life will take him, and rooting for him all the while to make the best choice. But what is that choice? It’s not an easy one and not always clear, so let’s just pause a moment and light up this next joint.

This is a great first novel by Terry Tierney; it’s one we at Blue Lake truly admireand highly recommend. --BLUE LAKE REVIEW

“[An] engaging tale of nomadic hippiedom . . . Flash’s journey is frightening and heartening.”  -- The San Francisco Chronicle​