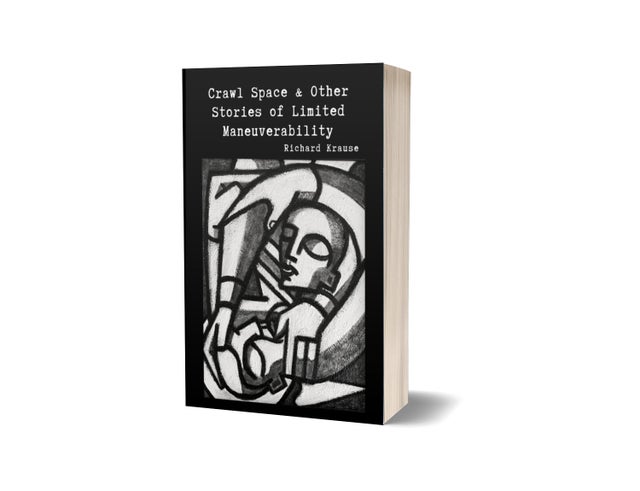 Crawl Space and Other Stories of Limited Maneuverability by Richard Krause

Crawl Space and Other Stories of Limited Maneuverability is a collection of stories about the fallout from limited maneuverability, whether it be the horror inside the walls of a New York City apartment, the firing of a professor on a college campus, bullying in the basement of an orphanage, the restraint a father feels reaching out to touch a youth, the confinement inside jockey underwear, the consolation of a typewriter over an unreported violence, an actual hanging by boys after a church service, the fatal end of a patient’s world following a hospital miracle, the shyness of a classical pianist breached by a man named Ray Rice, the drama inside a Madrid bullring, the consequences of an old man’s collapse at a urinal in Yokohama, the rejection of the vegetarian Cain by God, the torment of a pelican under a bridge in Mexico, Presidents shooting bears or obsessing about scratches on a cherry table, a preoccupation with curtains when preparing for a visitor, how a house full of knickknacks replaces people, the power of beets exposing sibling rivalry, a predicted automobile accident enlarging the stunted lives of two lovers, the claustrophobia over a book of Matisse art, the triumph after the modest boasts of an actual stuntman, the recollections of a stubborn liver in a frying pan, the weekly ritual of Pop paddling young boys, a pearl family’s revenge for the horrors of World War II, the secret life of a British aesthete in Japan, or the results of reduced mobility inside an actual crawl space.

These 31 stories have a way of inhabiting the reader’s mind, working their various ways into the reader’s very heart. How do they achieve that? It’s the tone, the  mesmerizing mood of the prose. Richard Krause is something of a hypnotist; he is an Ancient Mariner who has not necessarily shot his albatrosses personally, yet he certainly knows how to bring them forward in the service of a good story. And a reader can be suddenly startled by an image, by a series of events, thinking: How did he know I was thinking that? I hope I am not overstating the pleasing yet uncanny feeling this collection awoke in me.

Permit me an anecdote. The day before I began to read the stories, I prepared a garnish from the seeds of a pomegranate. This is not something I do often. The vision on the cutting board reminded me of bloodshed, of smashed brains scattered on the ground; I have photographic evidence. Then my cutting board rose up in my memory as I read in ‘The Handkerchief’ that a ‘little white boy’ in an orphanage was ‘hastily beaten to a pulp’ ‘like a pomegranate crushed under foot’. I had the recent memory for reference.

The fact of children in orphanages runs through the collection like a distant toxic river of dark blood. Here, in the strangeness of the everyday present, the various violences of the past, whether they are from bullying or war or the boxing ring or the carnage of the highway, fling their twisted shadows forward. So often in the history of the characters there huddles a small and powerless child. Perhaps the most vivid and potent of all the stories is ‘Crawl Space’ itself, one of the longer stories in the book. It documents the converse of the odor of sanctity. This is a disgusting pervasive smell death and decay of that emanates from the dark and breathless claustrophobic gap between the earth and the house.

Returning to the matter of the tone – I must hasten to say that, for all the torments of the characters and situations, the reader is in fact not tormented. No, the reader is perfectly safe in the prestidigitation of the writer, and can, while being startled and moved, somehow remain the wide-eyed serene observer. An innocence flows just beneath the surface of the terrors and catastrophes that beset the characters, and there is a sense throughout the collection that hope and goodness are sometimes just possible, that beauty exists in spite of everything. Yet adulthood and experience can be grotesque. There is ‘something implicitly frightful about adults’. And, ‘violence is always just around the corner’. Does anyone really escape the memory, no matter how small the enclosure or how secure the locks?’

Do yourself a favor and take a dive into the crawl space.

-- Carmel Bird, author of Field of Poppies and countless others

Get ready to go spelunking in these cavernous stories. More than entertain with escape, they descend, ascend, and pierce into the substance of being.

With the introduction of some themes the book - sex, punishment, family, and irony, among others - the disturbing opening tale of abuse and pleasure, and their intersections, is indicative of the exposition that follows. There is no gently going into the night in this book, rather, characters grope around in a gaping, ever-present abyss of traumas past and present. The stories get inside of a multitude of feelings, indulge and expose, poke and question, but never judge. Judgement is reserved for institutions, like repressive cultures, the law, war, some churches and schools, that limit maneuverability among feelings. “He was the instrument that brought the best out of us” (28), but the music teacher in one story was fired. What could come out is meant to stay inside, festering and fostering internal judgement and strife in several stories. A father combats feelings of inadequacy toward his son and his gregarious friend. A teacher’s high ideals prevents him from accepting love from a desirous woman. In a few stories, men imagine they’ve killed someone by dint of will, with their lustful thoughts. With characters becoming their own enemies, the stories offer an omniscient point of view. Often told in the subjective first person, the audience is invited in as “we.” An objective reality is established through repeated dialogue, reiterating others’ undeniable perspectives. Questions posed throughout the text operate similarly, the stories remind readers of a vast mystery that goes largely unsolvable despite efforts to get to the bottom of things.

The middle stories are shortest, each elucidating one metaphor, like Bull, Pelican, Teddy Bear. Seemingly innocuous subjects become passages into fraught histories. These shortest stories serve as palette cleansers before the beefiest tale: Crawl Space in which a homeowner searches his house’s air ducts for the source of a noxious smell. He’s convinced it’s from a girl he stalked, who haunts him. Alongside the humorous physical contortions required of him to find her, run his anguished thoughts. A ripe combination of creepy and funny produce an absurd, tantalizing, and unforgettable result in this latest collection from master storyteller, Richard Krause.