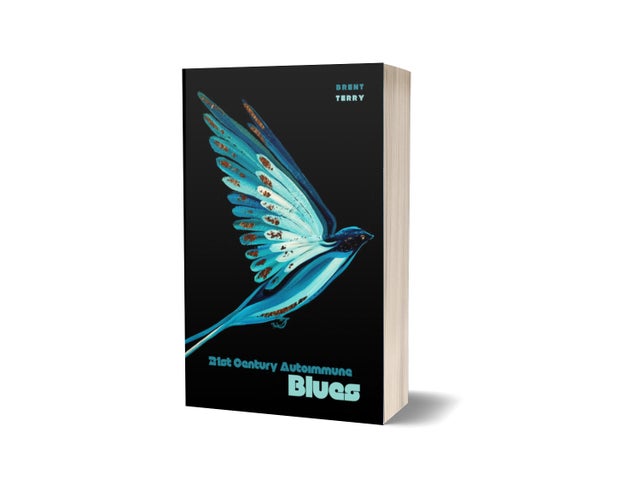 21st Century Autoimmune Blues is multi-genre author Brent Terry’s fourth collection. Terry brazenly confronts subjects that are simultaneously political and personal. The undertones range from comedic to emotional, stimulating the head, heart, and gut. Every poem in this collection hums with an underlying anxiety caused by living in these fraught and sometimes dismaying times, but Terry never fails to paint a rhythmically sound image.

“Brent Terry’s delightful messing around in his new book, with sound, with ideas, with language, with images, it’s always for a serious purpose. His poems record the things of the natural and man-made world while looking into the self, politically and with feeling. “Was there a time before beauty was ironic?“ he asks. He means that, inflicting his intricate wonders with plenty of irony and wit, but also with much real, sincere beauty. These are poems of panache, energy, and just a touch of the right kind of aggression and in all the right directions. “It was the year of weird food and devastation,“ Terry writes. 21st Century Autoimmune Blues is about who we are, who we’ve been recently, and who we Americans have always been.”

​Death at the Food Truck Rodeo

Oh, how like love, to be stung by the first bee
of summer!  The stab, the electric thrum
that numbs your fingers, dispatches your lemonade
earthward, the burrito anointed in sweet
green chili now a part of your ensemble.
Bespattered by the divine, your EpiPen on top
of the dresser next to your cufflinks
and copy of Howl, your friends are still en-route,
your love in Duluth, bee still dangling
from the webbing between your forefinger
and thumb, and what you need, you think,
is to sink to your knees among the tender young tufts
between Falafel Kingdom and The Burrito Bandito,
to be floored by the hivebuzzed blossoming
of tinnitus, the shouts of children, the caffeinated
strum and brass of Mariachis, the fading chorus
of faces stuffed with dough.  You are bewitched
by the shadows of leaves, hand-painted signs
for Cubanos y Coca-Cola, the acid-trip, eight-foot
radioactive haban͂ero lacerating the aluminum
skin of the taco truck across the green.
It all starts to prism, to whirl, the whole panorama
bright as fruit and booze in a blender.
You try to swallow, to speak.  Your lips attempt
to wrap themselves around “a bee” or “goodbye”.
Here on Earth your back is caressed by green tendrils,
but you are beginning to bob, to balloon
yourself cloudward.  Fluid fills your fingers
and your lungs.  The sky fills with helium,
a high-pitched holy hollering.  It’s only love,
and thus the birds commence with their elegies
and elaborate dances.  Your grandmother warbles
a tune she sang when you were just a boy.
Your lover whispers hush, then ghosts your lips
with kisses.  Some new music, systemic as summer,
as anaphylaxis, now courses through your body
like cotton-candy or fire.  You are a world.  You orbit
yourself.  You’re so full of life you could explode
into a billion hyacinths and then you do.