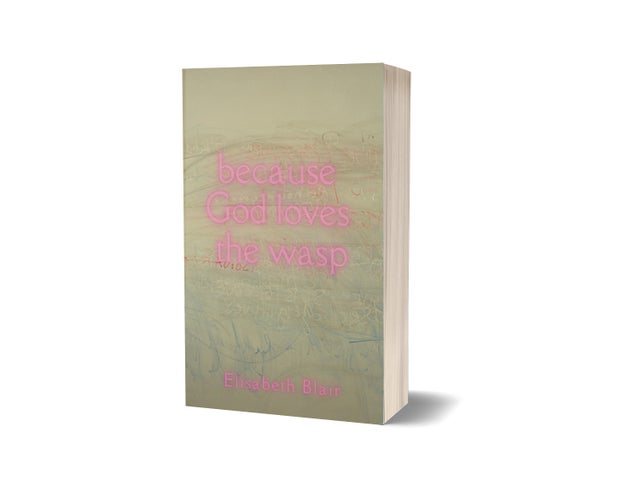 PREORDER: because God loves the wasp by Elisabeth Blair

A memoir in verse, Elisabeth Blair’s because God loves the wasp documents two and a half years she spent living in two abusive facilities for “troubled teens” during the late 1990s. The wilderness camp and emotional growth boarding school were modeled on the teachings and tenets of Synanon, a mid-20th-century cult.

Alternating between painful clarity and surreal metaphor, the poems grapple with the shock and disorientation of being taken away in the middle of the night by strangers; the bewilderment of navigating expectations in an environment of institutionalized bullying, shunning, and sleep deprivation; and the gravity of the adulthood that follows.

Writing in the second person, Blair confronts the reader, withholding the potential relief of distance. Ripping through a patchwork of disturbing descriptions—of violent staff, isolated and terrified children, and decades of brutal nightmares—she cradles her fierce testimony in sonorous language and striking imagery.

The book’s tight corralling of traumas takes aim at the notion that inducing fear, despair, and shipwrecked helplessness can rehabilitate a child—the catastrophic doctrine of “tough love.”

Elisabeth Blair writes as a survivor of a sadistic and dehumanizing facility for “troubled teens”—or perhaps the word is “camp.” It certainly reminds us of the other, more famous camps, gulags, and re-education centers we’re aware of. Because Blair is also a brilliant poet, she can take us into the perceptions of the shattered person or, in this case, child. The child understands only the contours of coercion: “the storm wants specific things.”  In fact, she no longer identifies as human, and, at times, that seems like a good thing: “You tell them you’re a slice of grass where a shadow falls—/your greens seem burnt/but they’re not.//They don’t believe you.” Blair’s language is barbed, destabilizing, and very much alive. This is an important book.