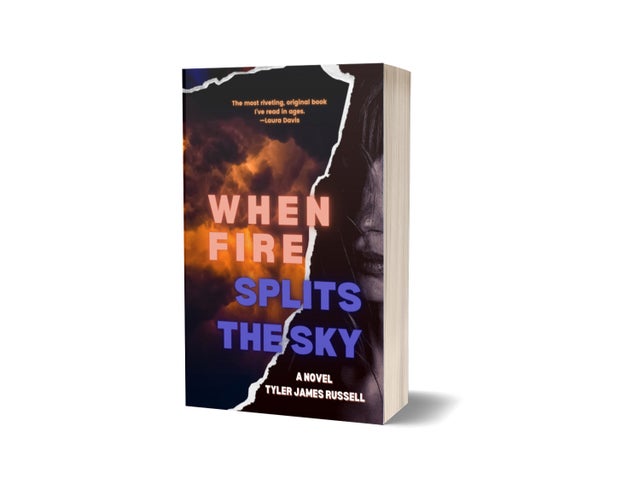 PREORDER: WHEN FIRE SPLITS THE SKY by Tyler James Russell

Following Ben’s weekend hunting trip outside Juneau, his wife Maranda—a trauma survivor with multiple personalities—makes a discovery that looks like it will finally put their limping, less-than-a-year marriage out of its misery. But in the morning, when a cataclysmic blast throws the world into chaos, Ben and Maranda find themselves stuck in a car, heading north to Anchorage, on a seemingly hopeless quest to reunite with a missing family member before it’s too late.

Driving for days through the fiery devastation, Ben and Maranda’s marital and personal trauma plays out against what might be a global—or even cosmic—catastrophe. All the while, they are pursued by two men with dark ties to Maranda’s past. To reach Anchorage, Ben and Maranda will be forced to confront their blackest secrets as they decide what any relationship might be worth at the end of the world.

Told in alternating chapters from Ben and Maranda’s perspectives, When Fire Splits the Sky is an apocalyptic, psychological, road-trip thriller about the limits of our capacity to endure, change, and survive.

Intense, propulsive, full of dark energy, Tyler Russell’s novel envisions the end of the world through the yearnings of two characters barely clinging to what makes them human. Its darkness is irradiated by a sharp wit, psychological depth, and lyricism unusual in a thriller barreling this quickly across the pages. Fans of Palahniuk’s Fight Club, Flynn’s Gone Girl or McCarthy’s The Road will savor these nonstop pyrotechnics.

Robert Rosenberg, author of This is Not Civilization and Isles of the Blind.
​

A spellbinding thriller about the shattering impact of human trafficking, set in a devastated and dangerous apocalyptic world, Tyler James Russell’s brilliant exploration of how the human mind copes with extreme trauma grabbed me on page one and never let me go. Russell’s creative language and short riveting chapters kept me glued to the page, desperate to know what would happen, yet I didn’t want this remarkable, terrifying story to end. When Fire Splits the Sky is the most riveting, original book I’ve read in ages.
​
Laura Davis, author of The Courage to Heal and The Burning Light of Two Stars

This is a welcome reprieve from the simplistic caricatures about someone with multiple personalities that have become common today. No serial killer. No crazy person. Just a look at the alters that fill out the person Ben calls his wife. When Fire Splits the Sky helps us see the humanity and struggles of both Ben and Maranda (et al), as they fight to come to terms with their personal and relational trauma, searching for a path toward mutual healing.

Sam Ruck, author of the Loving My DID Girl(s) blog
​